skip to main | skip to sidebar

This blog is no longer active.

This release adds nice dialog for name input and stats in right-hand edge.

There's no menu for loading games, just type in the name of the character to load.

It's 0.02 because there's color again and you can save/load games.

It's d because it's a development release with some really obvious ugly bits. The stat window exists, but has no data. Also the dialog during save/load is horrid.

In order to load, put in the character's name you want to load. Note that there will be no confirmation about your current game disappearing into the void, which it will. Also, the .txt file that contains the save is deleted upon loading.

Since I haven't listed the commands yet, here they are:

Reported Bugs Killed with this release:
*Player being placed on the border, thereby leading to crash when trying to move off of map area. Player will now only be placed in a legal starting space.

If anyone has other suggestions/bug reports, please let me know. You can post a comment here or email me at eben dot howard snail/at g m a i l dot c o m. Will that protect me from spam? Probably not.
Posted by Eben at 10:59 AM No comments:

This version uses slashie's libjcsi library to emulate a console in Java, making it much less system resource intensive than previous versions. Currently color has been stripped, so everything is in black and white.

Get it here. (Same link as last time, just a new file up.)

Other changes include:
*Enemies start out asleep (won't attack or move) and if attacked will wake up and chase the player if he moves away.

*Stairs! You can now go down and up stairs! Going down gradually increases the generation of tougher enemies. Note that you can only go up one level, allowing you to escape if get a bit too deep, but you can't entirely run away.

*Random particle clouds get in your way now, but there is guaranteed access to every floor space on the level, so don't worry too much.
Posted by Eben at 7:22 AM No comments:

Now Quarker is playable! Kinda. The enemies don't move, but they will attack if you're next to them. There is no saving or loading yet. It's still under development, obviously.

Currently only the numpad (with num lock on) works for movement, 5 rests. Also when you die, you'll only get a text message to let you know. You have to exit manually.

You can get the .jar file for it here: http://www.geocities.com/eben.howard/

Please feel free to leave any comments you might have on it, bearing in mind that I still consider the game to not be fun :D
Posted by Eben at 7:07 AM No comments:

Here's what the current version of Quarker looks like in action: 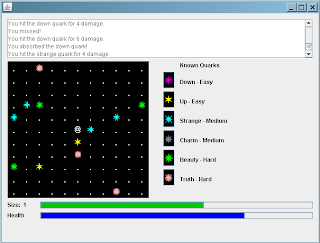 If anyone wants to try it out, email me and I'll send you the .jar file. I warn you that it's not yet terribly fun.
Posted by Eben at 8:58 AM No comments: